The Livingston Parish School Board has approved bid proposals and funding for construction projects throughout the district to address much-needed renovations and expansions to keep up with the parish’s growth. Here’s a brief report:

The board will put out bid requests soon for the new academic building at Walker High School, which is part of a major campus expansion that is estimated to cost about $23 million and will include more than 30 classrooms, a library, vocational training area, a cafeteria, band room and athletic facilities.  Voters in the Walker School District approved the funding for the improvements in a special election in May 2014.  Work has already begun on a new parent pickup area, utility upgrades and improvements to the field house, including lockers, a wrestling room, offices and areas for trainers.  Phase I of the construction also includes preparation work for the main classroom building.  The field house work is expected to be ready in August.  All the improvements are expected to be completed sometime in late 2017 or early 2018.

At the same time, the board approved a $1.2 million bid for an eight-classroom expansion at Denham Springs High School.  The new expansion will include an on-campus credit union for students and faculty, a school store and choir room.

Construction crews also have been working to convert the old, unused Live Oak High School to a campus for students in 7th and 8th grades, freeing up space at the local middle and elementary schools.  Crews are putting in new floors, ceiling tiles and lights, as well as rewiring the school for increased computer and wireless Internet access. They are expanding the cafeteria dining room and changing bus and drop-off lanes, and upgrades are being made to the gym in hopes of making it a designated FEMA emergency shelter.  Federal monies have been allocated to replace the gym roof and add storm shutters.  School officials are hoping the $4.5 million project will be completed before the end of 2016.

Other improvements include a new cafeteria and classrooms at Southside Elementary; a new band room with a gym expansion and possibly a new library at Southside Junior High; and three classrooms and a multipurpose building at South Fork Elementary, which is in addition to four new classrooms that opened earlier this year.

On the east side of the parish, major renovations are underway at Holden High School.  New roofs are being built for the school’s cafeteria, special education building and gymnasium.  Improvements will also be made to the interior of the school’s historic gym, which was built in 1950 at a cost of $34,640 with the help of local community members, including many of the family members of recently retired principal Paula Green.  Those improvements will include new insulation and a vaulted ceiling, new lighting and improvements to the locker rooms and concession area.

Voters in the Springfield and Albany School Districts will go to the polls on April 9 to vote on two separate and independent funding proposals for construction projects to manage the continued growth in both of these communities.

School officials are proposing to construct a new Springfield High School on land that has already been purchased for the purpose of a new school.  The current high school has run out of classroom space, as well as room on the campus for additional temporary buildings.  If voters approve a new $14 million bond proposition, officials will build a new high school on 88 acres south of La. Highway 42 at George Settlement Road.  The new school’s design will honor the community high school building that was destroyed in a 1971 fire.  Upon completion, the middle school will be moved to the current high school campus, where air conditioning is also being installed in the gym.

Albany school officials and community leaders are proposing to build a new elementary school on 13 acres north of town, off La. Highway 42, a new gym at the middle school and additional classrooms at the high school.  The $13 million project also includes renovations and technology upgrades to the upper elementary school library. 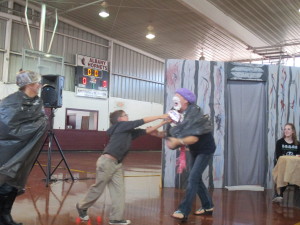 Students at Albany Upper Elementary raised more than $1,000 for Livingston Parish Sheriff Jason Ard’s Christmas Crusade, which works with local organizations and families to provide Christmas gifts to the children of needy families.

For their effort, the students were able to put a pie in the face of Principal Lisa Sessions and Assistant Principal Jeanna Saucier.

School Administrator Debbie Kropog said student winners from each school district will go before a panel of judges for an interview and to review their portfolios.   South Fork Elementary will host the competition, and Livingston Parish Assessor Jeff Taylor and Livingston Parish Federal Credit Union are helping to sponsor the event.