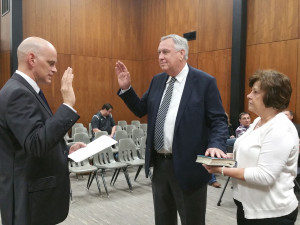 Steve Stafford, left, administers the oath of office to David “Bo” Graham, as his wife, Betty Graham, holds the family Bible. Graham will serve as interim board member for District 7.

The Livingston Parish School Board appointed David “Bo” Graham to serve as the interim representative for District 7, filling the vacancy created by former board member Jimmy Watson’s election as Walker mayor.

Graham received the board’s unanimous approval as Watson’s appointed replacement and was sworn in during a recess at the board’s Jan. 5 meeting. An election will be held Oct. 14 to fill Watson’s unexpired term, which runs through Dec. 31, 2018.

Graham is a retiree from the United States Postal Service. He is a life-long resident of Walker, and a graduate of Walker High School. 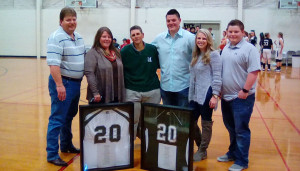 Scivicque earned All-American and All-SEC honors at LSU, and in his senior year, was one of three finalists for the prestigious Johnny Bench Award, which identifies the top college catchers. He was drafted in the 4th round of the 2015 Major League Baseball draft by Detroit, who traded Scivique to the Atlanta Braves’ organization for the 2016 season.

The new temporary campus for Denham Springs Elementary will soon open on property on Hatchell Lane thanks to help from the Immaculate Conception Catholic Church. The church has donated the use of approximately four acres of its property at no cost to the school system, as a “privilege to return the favor,” according to Father Frank Uter.

He noted that prior to 1964, when the local Catholic Church was a one-room building located on Range Avenue, its young parishioners attended religion classes on the Denham Springs Elementary campus because of a lack of space on church property.

“The school board graciously made their facilities available to our young parishioners and their families. We now have the opportunity and privilege to return the favor and make some of our campus available to them,” he recently wrote in a church bulletin.

Father Uter noted that the presence of the temporary campus has been designed to not intrude upon the church’s Fall Festival grounds more than necessary.  In fact, the church’s annual carnival is slated for Oct. 27-29, 2017.   He said the agreement with the school system has the unanimous support of the Parish Finance Council and the Diocese. The temporary campus for Denham Springs Elementary is expected to open in early February.

A MOMENT IN HISTORY 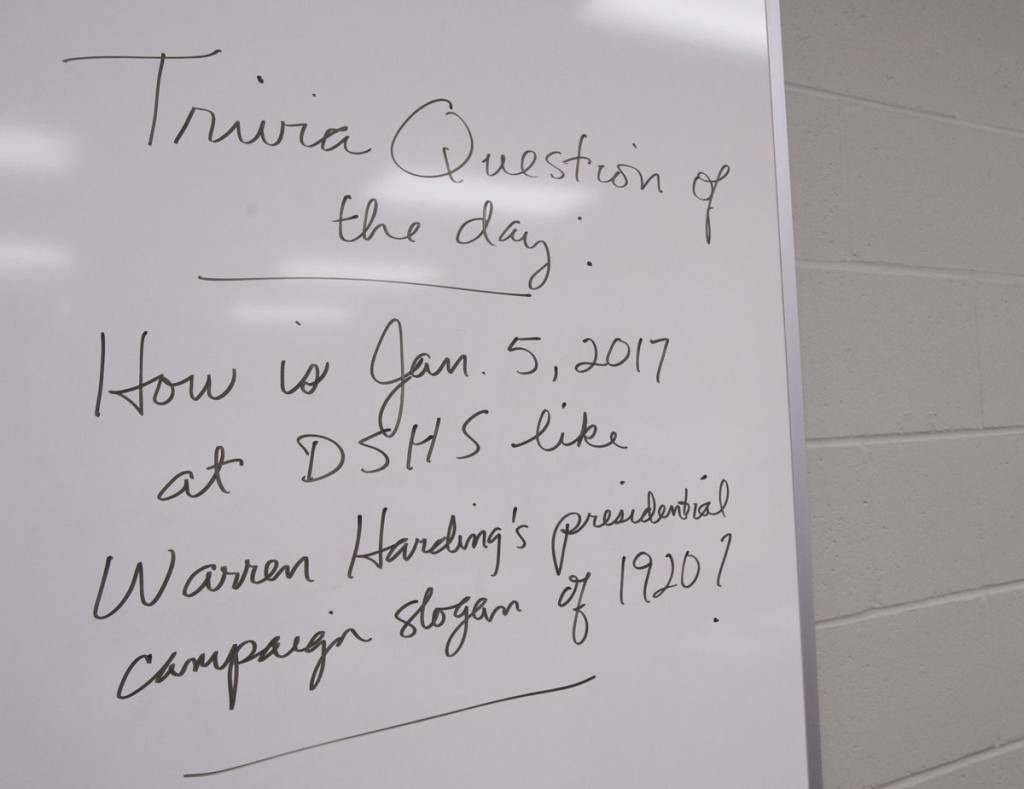 Denham Springs High School chemistry teacher David Kemp’s white board greeted students returning to the campus with a trivia question, “How is Jan. 5, 2017 at DSHS like Warren Harding’s presidential campaign slogan of 1920?” The answer: It’s a “Return to Normalcy.” Classes started back on the DSHS campus Jan. 5 for the first time since the August flood. 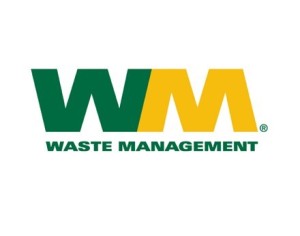 Waste Management has donated $200,000 to Livingston Parish to aid flood victims in their recovery efforts. Residents who were heavily impacted by the flood are asked to fill out an application to be eligible for a cash grant valued up to $2,000 per applicant.  Decisions will be based on specific needs laid out in the application which is available online at www.lpsb.org, or at www.livingstonparishla.gov. For more information, send an email to livingstonrises@hotmail.com.