Livingston Parish Schools had the greatest increase in the number of 12th graders scoring 18 or better on the ACT over the testing period of 2013-2014, according to the Louisiana Department of Education’s latest report. The state reported that 143 more seniors in the parish scored 18 or better on the ACT in the 2013-2014 school year as compared to those testers who were scored in the 2012-2013 school year. That improved statistic is on top of an increase of 137 seniors scoring 18+ in the 2012-2013 school year over the previous school year. The top ACT score received by the students were used in the calculations, regardless of how many times and when the students took the exam. Superintendent John Watson said the district has made a concerted effort in the past two years to grow student ACT scores in the parish. He said all Livingston Parish high schools offer ACT Prep classes and after-school ACT tutoring.  He said the high schools are also utilizing a variety of study materials provided by ACT, including on-line practice exams. Those districts showing the greatest increase of students scoring 18+ on the ACT, from 2012-2013 to 2013-2014 included:  Livingston, 143; Jefferson, 132; Caddo, 108; East Baton Rouge, 105; and Bossier, 101. Louisiana is one of only 11 states in the nation to have 100 percent of its graduating seniors take the ACT in the 2013-2014 school year.

The number of seniors statewide earning a TOPS-qualifying score (based on their best ACT score) of 17 points or higher is up by 6,339 since 2012, according to the Louisiana Department of Education. The state requires the following ACT scores for graduating seniors to be eligible for the TOPS program – 17+ for TOPS Tech, 20+ for TOPS Opportunity & Regional Universities; 23+ for TOPS Performance & Statewide Universities; 25+ for the Flagship University; and 27+ for TOPS Honors.

ONLY ONE SCHOOL BOARD SEAT TO BE DECIDED IN NOV. 4 ELECTION

All current members of the Livingston Parish School Board who opted to seek re-election for another four-year term have been granted their request by virtue of having no opponent sign up against them during the qualifying period for the Nov. 4 election.  Two incumbents announced they will retire after this year – Dr. Milton D. Hughes of Denham Springs and Keith Martin of Springfield. Hughes, who represents District 3, will be replaced by former school principal and curriculum director Jan Benton of Denham Springs, who was unopposed for the seat.  Only Martin’s District 8 seat will be decided by a vote on Nov. 4.  Two candidates are seeking that office – David Hoover of Maurepas and James “Jim” Richardson of Livingston.  Those incumbents returning to the board include Malcolm Sibley of Livingston, District 1; Kellee Hennessey Dickerson of Watson, District 2; Karen Wax Schmidt of Denham Springs, District 4; Albert “Buddy” Mincey, Jr., of Denham Springs, District 5; Jeffery Cox of Walker, District 6; James “Jimmy” Watson of Walker, District 7; and Sid Kinchen of Albany, District 9.  The new elected term begins in January 2015. 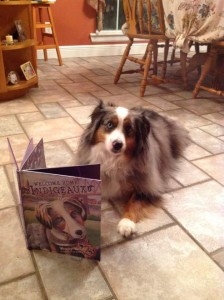 “Welcome Home Indigeaux,” the children’s book that tells of the adventures of a beloved Australian Shepard, is written and illustrated by two Livingston Parish educators.

French Settlement Assistant Principal Wendy Woods, and her friend and sister-in-law, Sherry Martin, a gifted and talented art teacher in Livingston Parish schools, have pooled their talents to create the children’s book, “Welcome Home Indigeaux.”  The story is based on Woods’ beloved Australian shepherd, whose imaginary adventures take the reader to several Louisiana landmarks, including Oak Alley, the State Capitol, the Mississippi River Bridge and LSU’s Tiger Stadium.  The book was released last year, and in January 2015 the two women will release a second book that continues Indigeaux’s adventures in “Yoheaux Indigeaux.” The second story is set in New Orleans and tells of Indigeaux’s adventures with pirate Jean Lafitte and his attempt to save prized treasure from a band of English Bulldogs. To promote “Welcome Home Indigeaux,” Woods and Martin regularly attend book signings.  They plan to attend the Denham Springs Elementary Fall Fair on Sept. 27, the Creole Festival in French Settlement on Oct. 19, the Louisiana Book Festival in Baton Rouge on Nov. 1, and the Livingston Book Festival at the Main Library Branch in Livingston on Nov. 15. They said their books sell at local businesses, and to date, they have sold more than 1,000 copies.

The improved and expanded Denham Springs Freshman High School gymnasium will seat more than 1,000 students in a temperature-controlled environment upon its completion at the beginning of November.

Students at Denham Springs Freshman High have shared their campus with construction workers and contractors over the past month in anticipation of them completing a $1.825 million upgrade to the gymnasium by the first of November. The gymnasium will be completely renovated, including expanded restrooms and locker rooms, new air conditioning and heating units, and an increase in seating capacity.  The gym previously seated 460 students; but with the expansion, more than 1,000 students will comfortably sit inside the gym.  School Board Member Buddy Mincey, Jr., said workers have also replaced exterior windows and HVAC units in classrooms at both the Denham Springs Freshman and High schools at a cost of $250,000, making them more energy efficient and comfortable for learning.  At the same time, additional improvements have been made to the Denham Springs High School Jacket Gym.  The Jacket Gym was completely renovated for a total cost of around $200,000.  These improvements follow a recent $230,000 renovation to the Denham Springs High School old science building, where classrooms were refurbished, two computer labs were added, and the special education area was enhanced.  Mincey said the improvements are a continuation of efforts to improve the infrastructure of the Denham Springs Freshman and High School to support existing classroom space.  All improvements are the results of two educational committee recommendations and the support of local board members to improve the Denham Springs area facilities.  Improvements are being paid for with existing funding.